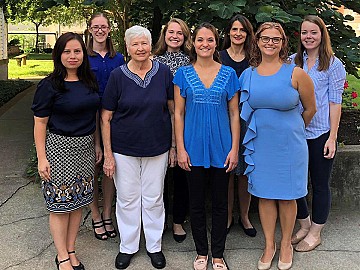 Since 2004, the KBF has awarded grants totaling $78,000 to support Maxwell Street Legal Clinic. Those grants help transform lives of low-income immigrants and refugees from throughout the world whose home is now Kentucky.

Citizenship is the end of a long journey that can take many years. A hallmark of Maxwell Street's representation is a thorough screening process to identify "red flags" and to ensure the best possible outcome for its clients. A recent report from Maxwell Street highlighted the way in which thorough screening and guidance positively impacted a client:

"David first came to Maxwell Street in October 2017. Our Legal Assistant pre-screened him. He met with one of our case handlers for an in depth review. David had been a lawful permanent resident for several years. He was ready to apply for naturalization. However, through screening we discovered that in May 2013 he had a misdemeanor conviction, later expunged from his record after he completed community service.

One of the elements of applying for citizenship is being able to show good moral character, particularly in the five years before applying. David’s conviction did not seem like it should pose a problem. It was for a minor violation when he was just 18 years old. But there was a catch: because it had been expunged, we would not be able to get records to submit with his naturalization application.

In immigration law, even expunged convictions count. Difficulty addressing them is a common barrier, one that our screening and advice is designed to address. In this case, our case handler explained to David the risks of applying without being able to provide records. We advised him to wait until at least five years since the date of conviction and then come back to see us. David returned to Maxwell Street in October 2018. At that point, he was beyond the five year window for the conviction. We still had to provide information about what happened and a certification from the court that they had no records. But David was scheduled for a
naturalization interview. We met with him to help him prepare.

David passed his interview and test. He became a citizen in June of this year. By properlyscreening and advising clients on their barriers, we’re able to set them up for success."

Help the Kentucky Bar Foundation continue to support great initiatives like this. Make a quick donation today—in any amount.